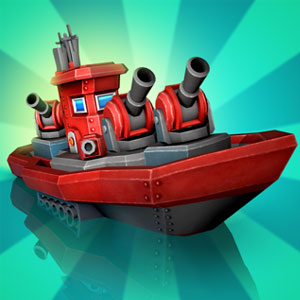 In HQ Destruction the goal is to destroy the enemy HQ by moving the own big sea mine towards the enemy base. To achieve this goal, you not only have to destroy enemy ships by using your canons or torpedoes, but also by collecting different kind of chest that are floating on the surface.

In Team Deathmatch the goal is to destroy more enemy ships within a certain timeframe than the opposing team.

Mine crates: They shine in the colour of your team and move your own mine towards the enemy HQ.

XP crates: Collect them to upgrade your ship. The more your ship evolves the more damage it deals and the more it can take.

Repair crates: Your ship will be destroy in case your HP reach 0. Collect repair crates to repair your ship.